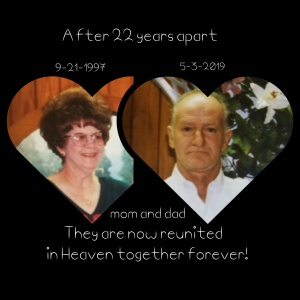 Calvin Joseph Collins, Sr., was born April 6, 1944 in Kansas, to the late Robert and Janette Collins.

After a long battle of grief and a short battle of cancer, on Friday May 3, 2019 with family at his side, he went to be with the love of his life "Sue' and the Lord.

Cal proudly served 4 years on the Army during the 1960s.

He was preceded in death by his wife and soulmate, Liz "Sue" Collins, of 28 years; brother, Robert "Bobby" Collins; and sister, Sharron Collins WIlson.

The family of Mr. Calvin would like the say a very special "Thank you" to the staff at Heart to Heart Hospice, His nurse, Dara, and to the staff at Marshall Manor West for taking care of our Dad.

There will be a private service for the family.